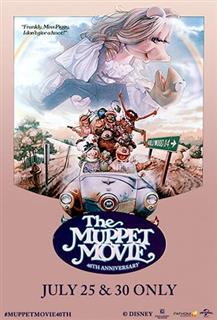 They're irresistible! They're irrepressible! They're The Muppets and their first full-length movie is coming back to the big screen in celebration of its 40th anniversary! After a fateful meeting with a big-time talent agent, Kermit heads for Hollywood to be a star. Along the way, a cast of lovable Muppet characters, including the dazzling Miss Piggy, the charming Fozzie Bear and Gonzo the Great, join him to become movie stars, too! Then the evil Doc Hopper tries to thwart Kermit's show biz plans and kidnaps Miss Piggy! Filled with memorable music, this critically acclaimed timeless comedy is a Muppet classic your whole family will enjoy!