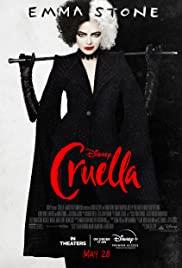 A live-action take on the iconic villainess from "101 Dalmatians." Cruella de Vil, who originated in Dodie Smith's 1956 book, "The Hundred and One Dalmatians," was voiced by Betty Lou Gerson in Disney's 1961 animated adaptation and played by Glenn Close in the 1996 live-action take (as well as in that film's 2000 sequel, "102 Dalmatians"). Smith also briefly revisited the character in her lesser-known science fiction sequel book, "The Starlight Barking."